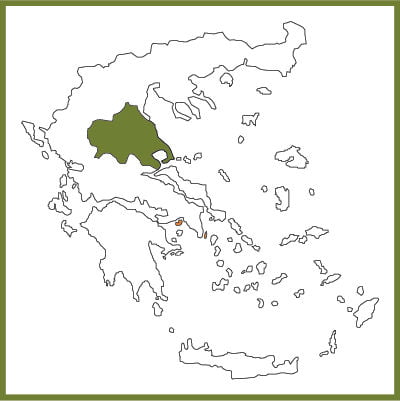 The plain is surrounded by high mountains. To the east are the Pelion and Olympus, the highest and best-known mountain in Greece, while to the west is the Pindus mountain range, the largest in Greece known colloquially as the spine of Greece. The mountain range stretches from near the Greek-Albanian border entering the Epirus and Macedonia regions in northern Greece down to the north of the Peloponnese. The Pineios River, the longest in Greece, runs through it.

In mythology, Olympus was the home to twelve gods. Today it is a destination for mountain climbers and lovers of nature. A large portion of it has been designated a National Park, with abundant shelters and hiking paths that set the scene for the mountain climbing Marathon that takes place at the start of summer.
The Pelion is the land of the mythological Centaurs. On its slopes, thick forests of exceptional beauty hide numerous traditional mountain villages where a large number of preserved homes and guesthouses are found. At its peak, there is a small ski center. Its abrupt slopes arrive at numerous beaches, thus uniquely connecting winter and summer holidays and the town of Volos the newest of the Greek port cities, with a large proportion of modern buildings erected following the catastrophic earthquakes of 1955.

Near the town of Karditsa in the Pindus mountain range is a large artificial lake Plastira, which was created by a dam built-in 1959. Aside from generating hydroelectric power, it is today also a tourist destination, thanks to its peculiar physical beauty.

Further north, near to the town of Kalambaka, is the famous and enormously impressive Meteora monasteries. Today, six of them accept visitors. Meteora is a cluster of rocky massifs 200 meters high and 300 meters in width. It constitutes the largest complex of monasteries in Greece after Mount Athos. The monasteries were at their height in the 16th century and are included in UNESCO’s list of World Heritage sites. Meteora is also a protected habitat as part of the Natura 2000 network.

Cooking our crops, The Trinity Farm

Agricultural Works at The Trinity Farm

Bread Making at The Trinity Farm

Activities of the Farm at Gralista Farm