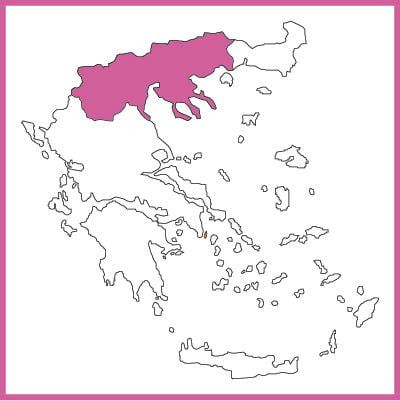 Its borders are defined to the east by Thrace and the Nestos River and to the west by Thessaly and Epirus, an imaginary line that links Kastoria with Mount Olympus. The metropolitan center of Macedonia in Thessaloniki, with a long history as the second most important city of the Byzantine Empire. Not far from Thessaloniki, in Vergina, are the tombs of the ancient Macedonian dynasties, the most famous of which is that of Philip II, the father of Alexander the Great.

The contemporary Egnatian freeway has been built largely along the traces of the ancient Roman Egnatia road that united the Byzantine capital of Constantinople with today’s Durres in Albania while passing through Thessaloniki and Philippi. Today’s freeway is 670 kilometers long and connects Alexandroupoli with Igoumenitsa, cutting across Macedonia from east to west.

West of Thessaloniki in Chalkidiki is the Mount Athos, an autonomous monastic state with twenty monasteries, most of which have operated uninterruptedly for the last thousand years. Also in Chalkidiki is the Petralona Cave, where traces of human habitation and a 300,000 to 400,00- year-old skull was found.

Macedonia is abundant in natural beauty. Its four large rivers, the Haliacmon, Axios, Strymonas, Nestos, and the lakes Volvi, Vegoritida, Kastoria the Small and Great Prespa, give witness to the rich hydrological substructure of the region, along with the famous mineral drinking waters of Souroti, Xino Nero and Doubia, as well as the thermal springs of Langada, Thermi, Pozar, and Agkistro.

In the mountain regions of Macedonia, you find rich forests like at the narrows of Nestos, Frakto, Elatia in Drama, Ypsarion in Thasos, while nine ski centers draw winter tourists.

Pick your own Grapes at Marianna’s