Crete is Greece’s largest, most populated and southernmost inhabited island. From 3000 to 1400 BCE, Europe’s oldest civilization, flourished on the island, the Minoan civilization. 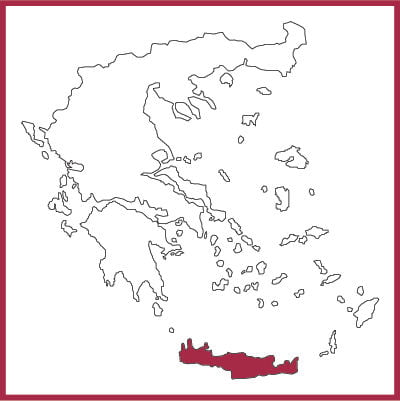 The main centers of the Minoan civilization were Knossos, Phaistos, Malia, Zarko, and Gournia, where palace complexes have been found. In 1450, and again in 1400 BCE, a series of catastrophes, possibly due to volcanic explosions on Santorini, caused their decline.

After the Roman conquest of Greece, Crete became a Byzantine province and following that, for an entire century (824-961 CE), was occupied by the Arabs and became a base of operations for pirates, centered on Handaka, today’s Heraklion. Subsequently, Crete returned to Byzantium until the arrival of the Venetians, who remained on the island for roughly five centuries, leaving a deep impression on its culture. Aside from Heraklion, Chania and Rethymnon flourished in this era.

The period of Turkish rule began in 1669 and ended in 1898, with the island officially becoming part of Greece in 1913. Another important moment in the history of the island was the Battle of Crete in 1941 when the Axis powers invaded the island during World War II with an airborne attack. The battle is also considered to be of great importance to Cretan because of the unexpectedly bold resistance the Cretans mounted against the numerically superior German forces. The graves of 4.465 German soldiers from the Battle of Crete are found in the German war cemetery in Maleme.

Feeding the Animals at Vavourakis Farm