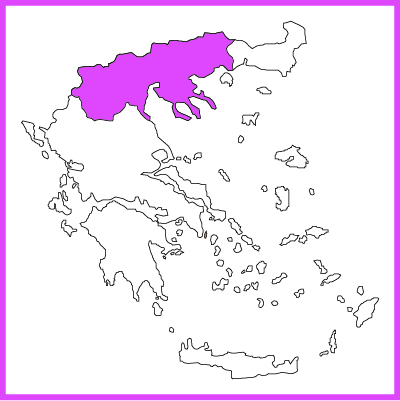 Its borders are defined to the east by Thrace and the Nestos River and to the west by Thessaly and Epirus, an imaginary line that links Kastoria with Mount Olympus. The metropolitan center of Macedonia in Thessaloniki, with a long history as the second most important city of the Byzantine Empire. Not far from Thessaloniki, in Vergina, are the tombs of the ancient Macedonian dynasties, the most famous of which is that of Philip II, the father of Alexander the Great.

The contemporary Egnatian freeway has been built largely along the traces of the ancient Roman Egnatia road that united the Byzantine capital of Constantinople with today’s Durres in Albania while passing through Thessaloniki and Philippi. Today’s freeway is 670 kilometers long and connects Alexandroupoli with Igoumenitsa, cutting across Macedonia from east to west.

West of Thessaloniki in Chalkidiki is the Mount Athos, an autonomous monastic state with twenty monasteries, most of which have operated uninterruptedly for the last thousand years. Also in Chalkidiki is the Petralona Cave, where traces of human habitation and a 300,000 to 400,00- year-old skull was found.

Macedonia is abundant in natural beauty. Its four large rivers, the Haliacmon, Axios, Strymonas, Nestos, and the lakes Volvi, Vegoritida, Kastoria the Small and Great Prespa, give witness to the rich hydrological substructure of the region, along with the famous mineral drinking waters of Souroti, Xino Nero and Doubia, as well as the thermal springs of Langada, Thermi, Pozar, and Agkistro.

In the mountain regions of Macedonia, you find rich forests like at the narrows of Nestos, Frakto, Elatia in Drama, Ypsarion in Thasos, while nine ski centers draw winter tourists. Domaine Claudia Papayianni is located in the village of Arnea, one of Chalkidiki’s mountain villages, 70 ... Since the late 19th century, the Aidarini family has lived in Goumenissa, where it produces fine wines an... Kir-Yianni was founded in 1997 by Yiannis Boutaris, one of the leading figures in the Greek wine industry... Four kilometres from the city of Naoussa, in the lush green settlement of Nea Strantza, lies the winery o...

Gerovassiliou Estate has been active since 1981. On the slopes of Epanomi, a few kilometers outside Thess... The idea originated several years ago with daily excursions to the mountains to collect mushrooms. Since ... Voskopoulos Handicraft is a traditional family business located in Piperia, Aridaia, below the thermal sp... The Oenogenesis Winery is situated amidst the Doxato vineyards. Respect for the environment, the flora a... "Vasaki" company was founded in 1970 and through difficult and dedicated efforts of the early years the c... Kozani Compulsory Partnership of Crocus producers was established in 1971 and consists of about 1,000 mem... Ktima Biblia Chora is located on the rugged slopes of Mt. Pangaeo, in Kokkinohori, Kavala prefecture. It ...

Alpha Estate S.A. located in the area of Amyntaio, in the prefecture of Florina was founded in 1997 by th... Kechris Winery and Distillery is a modern family business specializing in the production of high-quality ... Nico Lazaridi is widely recognized as one of the leading companies that are making a major contribution t... The Vaeni Naoussa Coop is one of the most modern wine-producing Cooperative companies in Greece, represen... Truffles were known by the ancient Greeks under the name of “Idnon” and were believed to be the result of...

The Siafarikas dairy and cheese company was founded in 1930. The business started by collecting and proce... Rodi Hellas S.A., was founded in 2006 and commenced operations by planting pomegranate trees on over 1,20...

In the heart of the prefecture of Florina, in the Aminteo region, lays a unique vineyard surrounded by th... Argatia Winery is a small family company established in 2004 in Rodochori, a small village near the city ... The Voyatzis Family originates from Velvento. Members of the family’s third generation, Yannis, who studi...

“Belidis Vineyards” is situated in Melissia, a small and quiet village outside Kozani, at an altitude of ...

The Gea Olympοu (‘land of Olympus’) estate is a small family-business farm located at the foothills of Mt...

Rizes (‘roots’) Greek Delicatessen was born of great love. Love for delicious Greek foods, made with the ...

The Tsantali family has been cultivating vineyards, making wines and distilling ouzo and tsipouro since 1...

Philippos Frangoulis founded the Doxato Flour Mill in the town of Doxato, in the middle of a plain in the...

S. Mentekidis S.A. company began its career in the field of bottling 26 years ago, and continues its dyna...

Pitenis Bros S.A. is one of the largest food production and distribution companies in Greece. Founded in...

In the spring of 2011 in Katerini, Pieria prefecture, a group of unemployed women joined forces to unite ...

Dio Fili (“two friends”) Estate is located in the town of Siatista and is a member of the Wine Routes of ...

Helixpro is based in Petralona, Chalkidiki, and focuses on the free nurturing of snails all through their...

Surrounded by the mountains of Falakro, Menikio, and Pangaio, our land lies in the township of Adriani in...

Pantou Winery is located in the Hydrousa region of Florina prefecture in northern Greece and was founded ...

Ιnspired by stories, the authority of specialists, and the secret recipes for authentic distillates we cr...

Each product of Sary delicatessen carries an interesting story. These tales begin with the Karamanlides, ...

The dedication of the Tatsis family to viticulture and wine production goes back in time and to its regio...

Although we have now moved from home-brewing to professional beer production, our goal remains the same: ...

Chronis Estate is located at an altitude of 730 meters in western Macedonia at the foot of the verdant mo...

The Platanorema Farm is an exceptional example of an agro-tourism resort that combines a landscape of ext...

Grape Harvest at the Vineyard at Oenogenesis Estate

During the grape harvest, visitors may join us to experience harvesting the grapes or selecting them to m...

Experience grape harvest at Dio Fili, learn the winemaking process and enjoy the day with us in Siatista....

Tour and Hunting to Winter Truffle Cultivation Visitors arriving during the cultivation of the truffle c...

Our wine range is composed of the sparkling Karanika Cuvée Spéciale and Prestige, produced by the traditi...

Visitors participate in feeding, collecting, and packing the farms' snails.

How to Make Superfoods at The Bear’s Honey

Visitors participate in the production of honey-based superfoods.

The Routes of the Honey at The Bear’s Honey

Through this activity, the visitors will get to know the beekeeping plants and the routes of the bees in ...

From the Bee’s Life at The Bear’s Honey

This is a two-day seminar including a theoretical approach, but mainly with experiential activities aroun...

Learn About Honey Herbs at The Bear’s Honey

The activity includes the identification of bee herbs through environmental routes in the mountainous reg...

Preparing Products and Theoretical Updates at The Bear’s Honey

During the winter period, we can only carry out production workshops and offer theoretical updates.

Picking Wild Mushrooms, Cooking and Tasting Visitors will have the opportunity to enjoy the unique exper...

Honey Harvesting at The Bear’s Honey

Visitors participate in the honey harvest through a guided tour of all the stages of honey production, fr...

Agios Antonios Women's Agricultural Cooperative was founded in June 1999 and was the first women's cooper...

Giorgos Manolesakis has been cultivating his vineyards in Adriani, Drama prefecture, since 1989 using int...

Pavlidis Estate is located in Kokkinogeia, in the northwestern part of the prefecture of Drama and just 1...

The Kazakis House of Viticulture has been in operation since 1994 and remains being a traditional family ...

The visitor can participate in a course for wrapping stuffed vine leaves with materials we provide.

4G is a pioneer company, active in the production of dried fruits, vegetables and edible plants, situated...

Our love of nature and respect for history and tradition has linked our family and the vineyard since 193...

Pick your own Grapes at Marianna’s

Guests are provided with baskets and pruners and pick their own grapes during a walk through the vineyard...

Depending on the season, visitors can join us in the farming activities of pomegranate trees such as trim...

Our master distiller invites you to explore the new generation of the Greek tradition and to discover our...

Two-course Meal with a Tour and Tasting Guided tour of the winery’s experimental vineyard and the winery...

"To Meli tis Arkoudas" (“The Bear’s Honey”) is a small family-owned apiary facility that has been active ...

Pick and Cooking Wild Truffles Visitors will have the opportunity to enjoy the unique experience of harve...

• Wine tasting: Visitors can choose between 8 different options. • The wine tasting is accompanied by bak...

Parallel to his interest in quality wine making, Vangelis Gerovassiliou's other aspiration is to enhance ...

Enjoy a guided tour of the winery and the vineyards, followed by a tasting of eight wines, accompanied by...

Tour and Tasting of Limited Production Let us invite you to a unique tasting of limited production wines ...