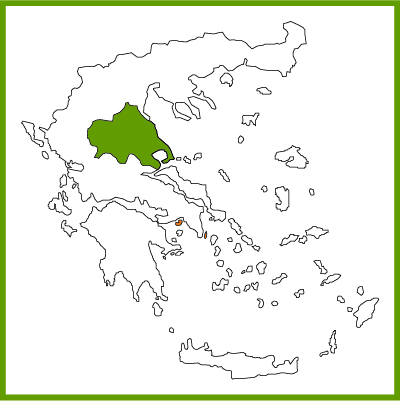 The plain is surrounded by high mountains. To the east are the Pelion and Olympus, the highest and best-known mountain in Greece, while to the west is the Pindus mountain range, the largest in Greece known colloquially as the spine of Greece. The mountain range stretches from near the Greek-Albanian border entering the Epirus and Macedonia regions in northern Greece down to the north of the Peloponnese. The Pineios River, the longest in Greece, runs through it.

In mythology, Olympus was the home to twelve gods. Today it is a destination for mountain climbers and lovers of nature. A large portion of it has been designated a National Park, with abundant shelters and hiking paths that set the scene for the mountain climbing Marathon that takes place at the start of summer.
The Pelion is the land of the mythological Centaurs. On its slopes, thick forests of exceptional beauty hide numerous traditional mountain villages where a large number of preserved homes and guesthouses are found. At its peak, there is a small ski center. Its abrupt slopes arrive at numerous beaches, thus uniquely connecting winter and summer holidays and the town of Volos the newest of the Greek port cities, with a large proportion of modern buildings erected following the catastrophic earthquakes of 1955.

Near the town of Karditsa in the Pindus mountain range is a large artificial lake Plastira, which was created by a dam built-in 1959. Aside from generating hydroelectric power, it is today also a tourist destination, thanks to its peculiar physical beauty.

Further north, near to the town of Kalambaka, is the famous and enormously impressive Meteora monasteries. Today, six of them accept visitors. Meteora is a cluster of rocky massifs 200 meters high and 300 meters in width. It constitutes the largest complex of monasteries in Greece after Mount Athos. The monasteries were at their height in the 16th century and are included in UNESCO’s list of World Heritage sites. Meteora is also a protected habitat as part of the Natura 2000 network.

Visitors participate in all activities related to: • the collection of tea and oregano from the field • t...

It is out of love for nature and our region that we are engaged in cultivating and promoting the products...

Cooking our crops, The Trinity Farm

Visitors participate in cooking with the products they have gathered at the farm. Depending on the season...

Agricultural Works at The Trinity Farm

Depending on the season, farm activities can include tree and/or garden seed planting, crop weeding, harv...

Bread Making at The Trinity Farm

Visitors participate hands-on in the bread production with flour that comes from the organic/biodynamic c...

Activities of the Farm at Gralista Farm

Visitors can take part in the following activities: • Connect with the Greek breed of “Skopelos goat” • G...

Efkarpia Farm is a family business specializing in the cultivation, processing and packaging of legumes, ...

Antonopoulos Farm is located in Dilofos, on the slopes of Mt. Narthakio in Ancient Fthia, a spot of great...

Visitors participate in the collection of plums and their drying process, partake in the production proce...

Gripioti Farm, covering a hectare, is located at the village of St. George in the region of Kalogiros, wi... Katsaros Distillery is the oldest ouzo distillery with a long history behind, has managed to keep its rec...

The area of Meteora is a place that is suitable for truffle hunting. It has wild truffles, while accessib...

You may join us during the harvesting period to pick herbs and learn more about them.

The Dougos family embarked on its journey into the world of Greek wine in 1991. It was a journey that bec...

Our farm is located in the traditional mountainous village of Ellinopyrgos in the district of Karditsa in... Avgeri Bros. dairy was founded in 1987 by Nikolaos and Dimitrios Avgeris in Mourgkani, Kalambaka, and was... The history of Epsa S.A. goes back to 1924, when the Pelion region produced a surplus of lemons. Respondi... The Geraki family is one of the oldest livestock-farming families in the Skopelos region. The official de... In 1908, Karipidis family settled in Vounaina, Thessaly, with a great interest for viticulture. More tha... Our mission was to drive the family farm into a new era. Our student years at the university, our city li... The Agricultural Cooperative produces apples of high quality, tested and certified with the qualification... The Voskos (“shepherd”) co-operative was founded in 2007 by a group of young people whose main occupation... Our winery offers a magical combination of flavors, scents, and beautiful music next to the 12 Ha vineyar... Dimitris and Vasilis Chalkias were among the first Greeks to engage in producing the famous tea of Mount ... The Tsililis winery and distillery was founded in the village of Raxa, near Trikala, in 1989. The Tsilili... The name '’Flegga” derives from the mountain of the same name in the National Park of Valia Kalda on the ...