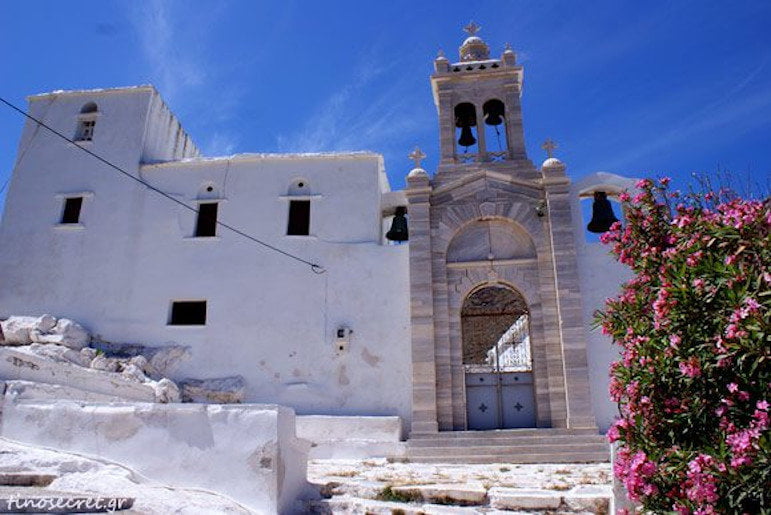 The church of Kyra Xeni is an important 18th century religious monument and is a protected heritage site. It is located 2 km east of Marlas village, which is built amphitheatrically on the slopes of Mt Profitis Elias of Panormos, and enjoys a splendid view. According to tradition, early 18th century captain Kosmas was passing by the northern coast of Tinos in a sailboat when an intense storm broke out, driving the ship onto the rocks. Holding an icon of the Virgin, Captain Kosmas vowed that, if he was saved, he would build a church in her honor. Wrestling with the waves, he managed to survive and headed towards the nearest village, Marla. At the place where today’s monastery is built, the icon became impossibly heavy and he realized that this is where he had to fulfill his vow. The name Kyra Xeni (xenos meaning ‘foreinger’) derives from the history of the icon, which came to the island from a foreign land and is believed to be the foreigners’ protector. 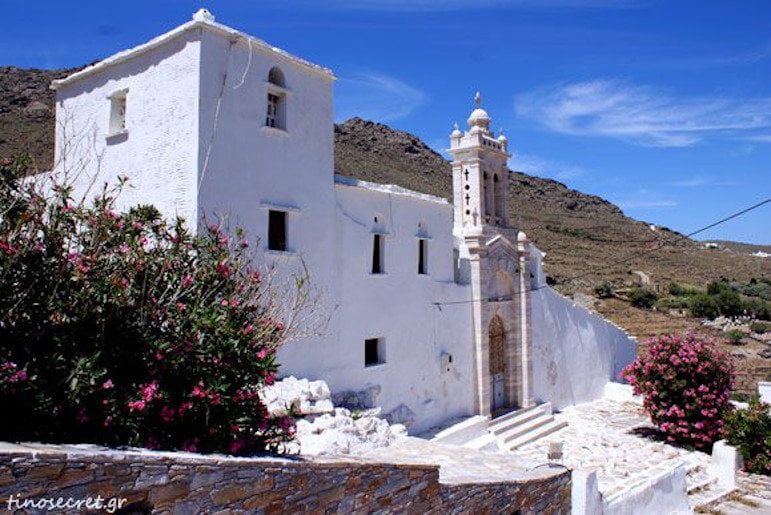 The formal celebration of the memory of Kyra Xeni takes place on August 14th, but since the interest of all of the Orthodox residents of Tinos centers on the Megalohari church in the center of Hora, the large festival for Kyra Xeni is held on the first or second Sunday after the 15th of August, enabling people from all over Tinos to attend. After vespers, a traditional treat is distributed to the participants. On the island of Tinos it is a tradition to whitewash inside and out every church whenever it celebrates the memory of the Santa to whom it is dedicated, while women of the village clean up the area around the church, polish the candle-stands, and decorate the sanctuary with flowers. After Mass, treats are served in the courtyard. The festival sometimes culminates in the main square with balo and syrto dances to the sounds of musicians playing instruments based on the violin.

People celebrating their name-day open their homes to the public, having decorated their tables with beautiful dinner sets and white tablecloths. A bounty of local dishes is served with abundant quantities of wine until late in the evening with offerings of psarakia, meringues, pasteli, and xerotigana along with homemade raki. Tinos traditional dishes are artichokes cooked in a variety of ways, sun-dried tomatoes with batter, froutalia, savore with molasses, fried fish with petimezi sauce, pork sausages, the saltsisi, and the louza of Tinos. Cheeses include the famed graviera and the kopanisti. As for sweets, famous are the amygdalota, xerotigana, karidota, pasteli, loukoumi, and various kinds of halva as well as the renowned thyme honey of Tinos.