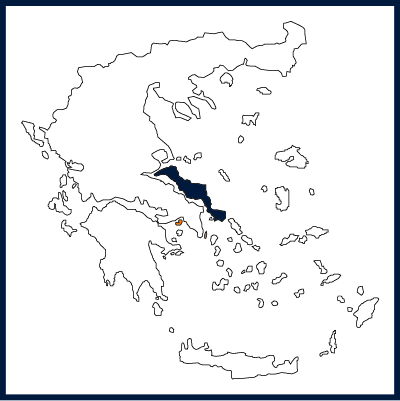 Fir trees and sea-friendly vegetation, imposing mountains (Dirfi is 1,743 meters high, while Ochi peaks at 1400 meters), endless beaches, fishing and hunting, the Aedipsos thermal springs, old monasteries, waterfalls, canyons, industrial monuments, and Cavo D’Oro are only a few of the many charming places on the island, along with its capital, Chalkida, which is friendly and affordable, ideal for endless walks next to the water. Yes, Euboea, with its unique beauty and view of the Aegean, is a microcosm of Greece.

Atmospheric villages like the traditional Kymi, Karystos with its Castello Rosso (Kokkinokastro), Limni with its lake, Rovies with its plane trees, Eretria with its archeological museum, Temple of Apollo Daphnephoros, and two lakes. The sunken town of ancient Eretria lies only 30 meters from the existing one, while distanced historically by 2500 years. The deserted villages of Kafirea and, of course, Chalkida, with its fascinating Archeological Museum, the Lichadonisia islets, the twin Venetian towers of Mytika, as well as the monasteries of St. John (Agios Ioannis) the Russian, and St. George (Agios Georgios) Ilion, and the Galataki Monastery. All of these just scratch the surface of the island’s worthwhile sights.

Multiple findings confirm that Euboea has been populated since Paleolithic times. Important archeological finds have also been excavated from the Bronze Age. In Byzantine times, Euboea belonged to the military-administrative region (‘theme’) of Greece and reached great heights. During the Ottoman era, it remained in Turkish hands until 1830, when it became part of Greece. After the 1922 Asia Minor Catastrophe, many refugees took up permanent residence in Nea Artaki and Nea Lampsakos, as well as in refugee settlements of Chalkida and Amaryntho. During World War II, Euboea experienced German bombardments, while its inhabitants engaged intensely in the resistance.

Southern Euboea, Nea Styra and mount Ochi , hosts one of the most challenging mysteries of archeology. This involves the famous Drakospita (Dragon houses), which received their name due to their enormous size. These incredible structures, 25 in all, with their unique wall construction and the use their builders made of them, still a mystery today, are found dispersed throughout southern Euboea. 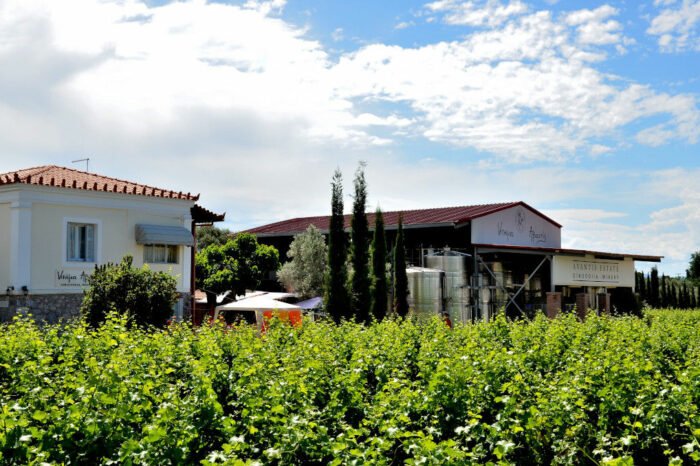 The Avantis Winery is located 4 km southeast of the town of Chalkida, in the village Mytikas or Ambelia i...

Dirfis Mushrooms was established in 2003 by agronomists and specialists in mycology Lefteris Lachouvaris ...

Lykos Winery was founded in 1991 by Apostolos Lykos and is located in central Greece on the lovely island...

Vateri is a family-run guest house created with loving care for our guests and respect for nature. Vateri...

Dardouma Family is a model family pasta workshop that produces a wide variety of handmade trahana and pas...

The Mitzifiris Estate is a small family business consisting of a privately-owned organic vineyard in the ...

At the village of Orologio at the island of Evia, chemist-oenologist Sophocles Panagiotou and economist G...

The Tzivanis family has been dealing with viticulture and the winemaking using exquisite grape varieties ...

Moschouta Estate is located in northern Evia at the municipality of Istiaia Edipsos, where the sea embrac...

Berryland was founded in 2013 to produce and make widely-known in Greece the valuable health benefits sup...

The motivation behind our family business, Filevia, was our wandering in unique traditional liqueur flavo...

The herbs of Cyclades have been famous for their unique and beneficial properties since the ancient times...

Montofoli Estate is a remarkable landmark in South Evia. Franks, Ottomans, and Kings have vested this lan...

Production of Pasta and Trahana at Dardouma Family

Engaging in the process of producing pasta, guests weigh the semolina and milk, break eggs and knead the ...

A Figs Co. was established in 1998 at Taxiarchis Oreon in Evia, at the heart of the region famed for the ...

The Vriniotis’ family winery is located in the small village of Gialtra in northern Evia, 14 km from the ...

Grape harvest is the most important stage of the year for the vine farmers and wine producers since the q...

Depending on the season, visitors participate in farming chores and engage with the farm animals.

The visitor may enjoy a unique experience of participating in the wine-labeling process.

Visitors join us to handpick arbaroriza (Pelargonium odoratissimum) as well as other aromatic plants.

MUSEUM The respect and admiration that Giorge Tzivanis felt for the way of life of previous generations...