On the island of Tinos, Arnados is built high on the slopes of Kechrovouni which affords an impressive view of all the southern Cyclades. It is a particularly picturesque village, whose main features are medieval arches and the cobble-stone streets. It has a strong colour of tradition, with elaborate dwellings and stoas (covered walkways) dating back to the Middle Ages. These medieval stoas give Arnados the appearance of an impregnable fortress. They were built to enable the Christian population to escape from the pirates who occasionally raided the island. Characteristic of Arnados are the houses reflecting the architectural style of Tinos, the beautiful square, the maze of narrow paved streets, the terraces and the stairways. The historic fountain of 1823 is located in the upper square. It has two large churches, the Ascension, within the village, and the Aghi Anargiri (St. Anargiri) on the road towards the village of Dio Horia. On the village’s large square stands the imposing Church of the Ascension of Christ, built in 1908. The church celebrates 40 days after Easter. After Mass, a festival takes place. 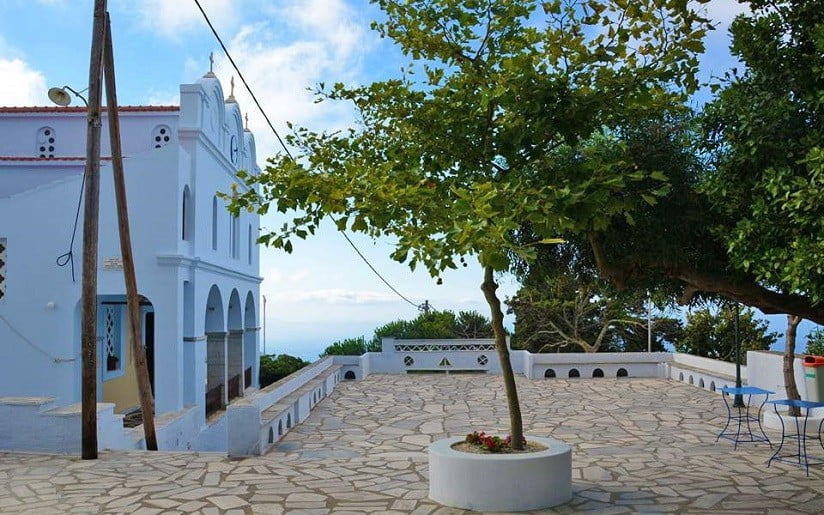 On the island of Tinos it is a tradition to whitewash inside and out every church whenever it celebrates the memory of the saint to whom it is dedicated, while women of the village clean up the area around the church, polish the candle-stands, and decorate the sanctuary with flowers. After Mass, treats are served in the courtyard. The festival sometimes culminates in the main square with balo and syrto dances to the sounds of musicians playing instruments based on the violin.

People celebrating their name-day open their homes to the public, having decorated their tables with beautiful dinner sets and white tablecloths. A bounty of local dishes is served with abundant quantities of wine until late in the evening with offerings of psarakia, meringues, pasteli, and xerotigana along with homemade raki. Tinos‘ traditional dishes are artichokes cooked in a variety of ways, sun-dried tomatoes with batter, froutalia, savore with molasses, fried fish with petimezi sauce, pork sausages, the saltsisi, and the louza of Tinos. Cheeses include the famed graviera and the kopanisti. As for sweets, famous are the amygdalota, xerotigana, karidota, pasteli, loukoumi, and various kinds of halva as well as the renowned thyme honey of Tinos.