Kythnos, Festival of the Holy Virgin of Nikous 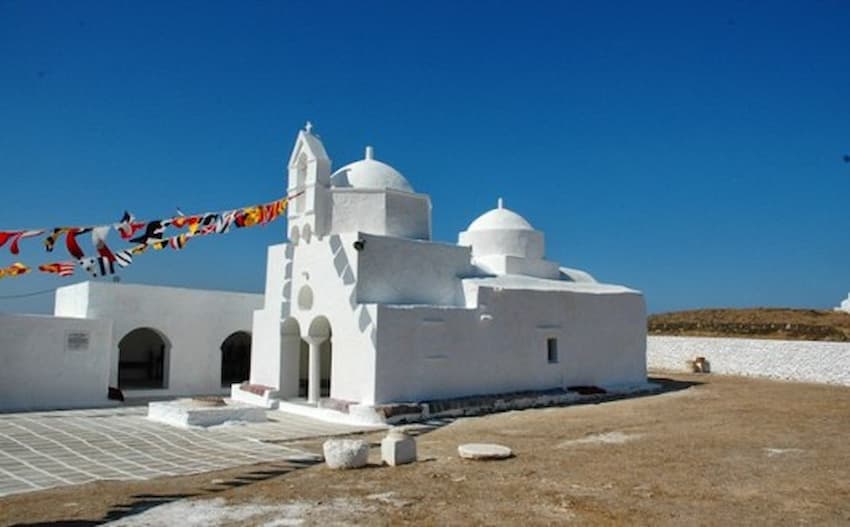 The village of Messaria was built in the 17th century on the edge of a plateau and is the island’s most beautiful settlement. It boasts striking Cycladic features, with cobbled streets, innumerable churches, whitewashed stone houses with tiled roofs and windows with Cycladic coloration, old multilevel mansions, shady arcades, fragrant flower gardens, and ancient ruins all around.

This historic monastery is approximately one kilometer southeast of the center of Chora (the island’s capital). Built on the ruins of an ancient temple, it got the name ‘Panagia tou Nikous’ from ‘Panagia Nikopoios’ (meaning ‘Victory-maker’), the Byzantine way of addressing the Virgin Mary. According to tradition, a famous icon of the Virgin Mary was brought here after the fall of Constantinople, before the Venetians transported it to the Church of Saint Mark in Venice. The monastery flourished from 1800 to 1840, when it functioned as a spiritual center under the guidance of the Greek teacher Makarios Filippaios, who was a graduate of the Phanar Greek Orthodox College, known in Greek as the Great School of the Nation, in Istanbul, Turkey. On the 15th of August, there is a big festival at ​​the monastery in honor of the Virgin Mary.

Upon visiting the island, make sure to ask about any festival (panigiri) that may be taking place and, if possible, make a point of joining one, as you will experience one of the rarest and most genuine traditional events in the Aegean. You will be treated to traditional appetizers as well as the local stuffed tomatoes, broth with roasted meat, and watch the Thermiotes (the citizens of Kythnos) dance the “balo” (traditional dance of the Aegean islands) with traditional music played by local musicians so well, that you will find it difficult to resist the temptation to join in the dance.

In the morning after the panigiri, a soothing broth that had been simmering throughout the previous night is served. The local cuisine is similar to the one throughout the Cycladic islands. While in Kythnos, try the famous tiropita and sfougato.  If you happen to visit Kythnos while a wedding is taking place, try the traditional dish of meat with red sauce, kokkinisto, and potatoes. Remember that whatever food you might try, it must be accompanied by one of the local cheeses or the exceptionally flavorful kopanisti. No one leaves Kythnos without trying the island’s pork, the marinated sun-dried fish, the rib chops and the local strapatsada with zucchini or the delicious caper-salad spread, the tarachta, with tomato and goat cheese or tomato, zucchini and potatoes, local goat meat (with either red or lemon sauce), sausage and salted pork, wherever found. Individual pitas, like koukoulopita with cheese and aromatic spices, kolopi with fresh spinach and other aromatic horta, pitaro with cheese and other open-faced pitas, either sweet (with saltless cheese, sugar and anise), or salty with xinotiri. Sweets abound such as sweet pitas with cheese, galaktoboureko, amygdalota and pasteli.