The Ionian islands are a grouping consisting in most part of seven islands and a number of smaller islets that are found in the Ionian Sea. The seven main islands are Cephalonia, Corfu, Zakynthos, Lefkada, Kythira, Ithaca and the Paxi. 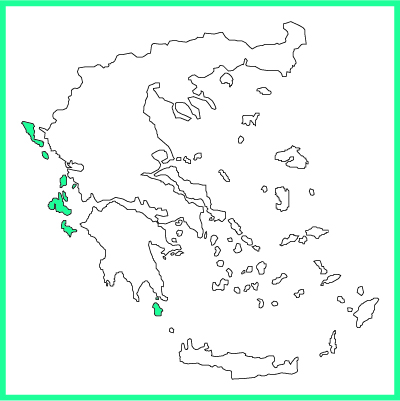 Corfu is the most cosmopolitan of the Ionian islands, maintaining the charm of its Venetian architecture, enriched by the influence of 50 years of British rule.

The Venetians called Lefkada St. Maura. Its beaches are renowned for its blue waters. Close to Lefkada is Scorpios, a small island that belonged to legendary shipowner Aristotle Onassis.

Cephalonia, the largest of the island group, is dominated by imposing mountains. It was the location for the film “Captain Corelli’s Mandolin”.

Zakynthos, known as the Flower of the Levant, or Zante was the homeland of Greece’s national poet and founder of the Modern Greek language, Dionysos Solomos. Among the most beautiful islands of Greece, it hosts beaches that serve as major breeding grounds for the Loggerhead sea turtle. Zakynthos and Corfu are the two Ionian Islands that have the most tourist development.
Ithaca lays south of Lefkada and northeast of Cephalonia and is known as the homeland of Odysseus from the Homeric epic of that name.

From the seafoam of Kythira was born Aphrodite who, as a heavenly goddess, was the protector of love and innocent romance. Kythira is found in southern Greece, between the Peloponnese and Crete, and has been inhabited at least from the end of the 6th century BCE. Off the island of Antikythera, the remarkable bronze statue of the Youth of Antikythira, dated between 340 and 330 BCE, was recovered from an ancient shipwreck. It is on display at the National Archeological Museum of Athens, along with the remarkable Antikythera mechanism. It is the oldest known, complex mechanism for determining the movements of celestial bodies and is the first known analog computer and was built sometime between 300 and 10 BC.

The history of the Ionian islands is wed to the sea. Lacking significant agricultural production or other wealth-generating resources, they developed their wealth from shipping during the 18th and 19th centuries by exploiting their strategic position between the West, represented by Venice, and the East, with the Ottoman Empire. It was Ionian ships that connected the granaries of the Danube and southern Russia to the great markets of Western Europe. The protracted domination of the Venetians, the absence of the Ottomans, and the cosmopolitan atmosphere introduced by international commerce made the Ionian islands the most “European” region of Greece. The organic farm Lithia stretches across an area of 5.5 hectares with olive groves, vineyards, and orchar...

Corfu Beer is the first micro-brewery in Greece to dare to produce a Real Ale beer, a natural live produc... The Theotoky family used to be one of the most powerful families of Greece as both the father and the gra... The vine-growers of the Robola zone sought to secure their livelihood while protecting and highlighting t... Domaine Foivos is the historical continuation of the Mantzavino Winery, the oldest operating winery in Ke...

A venue doubly creative, Art & Wine is located at Trilagada on the Greek island of Zakynthos near the mou...

Lazaris Distillery & Artisan Sweets was founded in 2005 by Konstantinos Lazaris. Inspired by the legendar...

The Grampsas’ Family Winery is locatedin the beautiful island of Zakynthos, in the semi-mountainous villa...

In a blessed corner of Greek nature, among age-old olive groves, fields, and pines and just 700 meters fr...

Visit our ecological farm, situated by Lake Korission on the southwestern coast of the island of Corfu, o...

Giannis Polichronatos, along with Kyriakos and Nikos Moraitis are the men who were inspired to produce Ke...

The Vasilakis family has been engaged in beekeeping since 1981. The love for the bees and the passion for...

Soap and Cosmetics Manufacturing at Bioporos

Learn easy recipes for making your own soaps, creams, and various kinds of cosmetics made of olive oil, h...

Learn how to cook the best-known Greek dishes, as well as the most ancient ones. Learn about Greek gastro...

Taking part in the Domaine Foivos harvest is an excellent and memorable experience. Visitors participate ...

Visitors participate at the grape harvest, learn the basics on winemaking and enjoy a wine tasting sessio...

Visitors are invited to join us in the olive harvest and work hard during the harvest season so as to exp...

Visitors can watch or participate, in the olive harvest in early winter. The process, taking place from m...

Located on an organic farm in Lakithra, En Kefallinia is a Greek restaurant that brings to life the dream...

Visitors are invited to participate in cooking lessons of traditional Greek cuisine. The lessons are ava...

You can observe the beehives from close, learn about this wonderful insect, and the factors that are thre...

During grape harvest, visitors experience the entire process of winemaking.

The winery has a pleasant tasting room and a Wine Museum one can visit, with an amphora storage space, an...